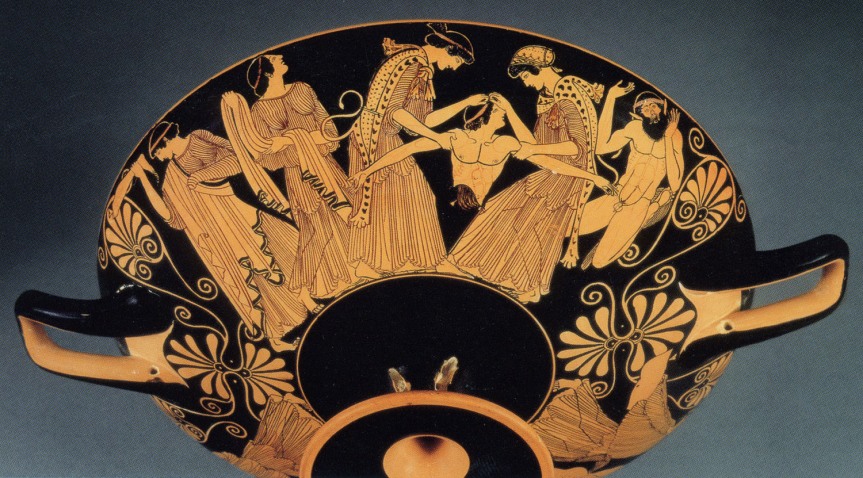 Maybe it’s the political climate right now, but I’ve read a few times and had the question posed to me in person, is Dionysos a god of anarchism? Right off the bat I’m going to say that I don’t profess to be an expert on this political subject, most of what I know about anarchism, socialism, democracy – political theory etc. was taught to me in high school by a wonderful history teacher, who I suspect was an anarchist.

To start, I’ll explain what I think political systems are: they are a constructed system that we silly monkeys have developed in order to live in order. Finding a divine behind these systems can be difficult, but not unheard of. There was a religious component in politics in ancient times and these themes continued until recently (and still do) . However I do not believe that Dionysos can be confined to a particular kind of system. Second, the nature of politics itself is bios, it is temporary and comes and goes in waves. This kind of inconsistency, impermanence does not necessarily fall within the realm of Zoë, an element of indestructible life that Dionysos is often associated with. (1)

Now let’s look at anarchism, in general it’s an ideal of a stateless society where people live in cooperative harmony. Within anarchism itself there are different concepts to how this ideal is achieved: Socialist, Green, Marxist etc. I’m going to avoid the different political theories and just focus on the ideal meaning of statelessness.

I’m assuming people associate Dionysos with anarchy for a number of reasons, I’ll address each I mention here: Dionysos’ involvement in regicide. God of liberty and freedom. Breaker of boundaries, including confronting social norms.

Two of the most well-known stories of Dionysos’ wrath involves regicide, first being king Lycurgus of Thrace. There are a couple of reasons why, but whatever the case Lycurgus sort to ban the cult of Dionysos even to the extent of imprisoning the god’s followers and driving Dionysos into the sea. The god eventually sort revenge by making the king mad resulting in his death or Dionysos cursed the land until the kings own subjects killed him.
The second case is Pentheus, this story is complex -nuanced- and depending on how one looks at it, one can consider Dionysos doing Pentheus a favour (2). Like Lycurgus, Pentheus expresses disapproval of the cult of Dionysos. When Dionysos arrives in the city he confronts Pentheus, who assumes the god to be mortal. After a of series back and forth quips where Dionysos tries his best to change the kings mind, Pentheus imprisons him. Naturally the boundless god frees himself and makes the king intoxicated, fools him to venture into the woods to spy upon the Bacchantes, at the roar of Dionysos the mad women find Pentheus, thinking him a lion, and tear him apart.

In both these stories Dionysos is not responding to the status of the kings, nor does he challenge their right to rule. He is challenging their sovereignty over his divinity. The kings are committing hubris against him and enforcing their human rules upon him, a god. In myth there are more instances of Dionysos favouring kings. Also within his major festivals we see sacred kingship, even during times of dictatorship and democracy in Athens. (3) Then there is Dionysos being a choice god to identify with by leaders. Next to Herakles, Dionysos is a very humanistic god and is known to appear in reality, literally. When Dionysos is on stage he is *actually* appearing on stage, when a man dressed as Dionysos leads the parade through the city he is *actually* leading the parade. He is a god of manifestation, of epiphany, a god of coming. Naturally kings also appear as the god. We really need to question why would a king want to appear as an so called anarchistic god? Lastly, Dionysos is a domineering god, which is why he is known to be so vicious towards those that oppose him. He intoxicates us, he is possessive, he dictates a state upon us which is his and only his.

God of liberty and freedom.

Being a non-American I’ve come to laugh at how citizens of that country view liberty and freedom. Watch a Hollywood period film like Braveheart, Alexander the Great, Troy, King Arthur, Gladiator etc. there is always some corny speech spouting about liberty and FREEDOM! This concept, which is totally weird in itself, is foreign and wholly American, originating from the War of Independence against the British. I have no idea why Alexander would be trying to espouse freedom on subjects who were in fact taken over by him and his father…  Anyway, freedom in Dionysos’ regard is better seen as freedom of worry, stress. The kind of freedom one experiences from a couple of glasses of wine after a hard day’s work. It’s the freedom to submerge yourself in the fantasy of the theatre, to be entranced in the dance, to be yourself. If we wish to look at Dionysos’ Chthonic nature, it is the freedom found in death. The kind of freedom Dionysos grants is cathartic and healing, if that is related to politics its circumstantial.

The cult of Dionysos is one of the few instances where the tightly structured society of Ancient Athens saw a relief from the social conformity expected, transgressing status of gender, social standing, wealth and poverty, even slavery. Women were allowed to venture outside their homes and camp in the wild, slaves changed roles with their masters, public drunkenness was allowed, but all within a limited time frame once per year. Again this is cathartic, the Dionysia was a time where neighbours and friends could shout insults at one another without repercussions, for common folk to mock nobles, a time for *equal* release. Afterwards the women would return home to their children, the men would go to work and the nobles would continue to rule. If this demonstrates an association of anarchism, it’s a very limited one.

Actually one could more soundly argue that if there is a political position Dionysos has it is democracy, the democracy born in the theatre. Theatre was of same measure of sacredness to Dionysos as his more well know attributes of wine and it is in theatre that freedom of speech developed, of public political discussion and political plays. It’s no coincidence that Athens had a theatre going culture alongside the first sparks of democracy. But who was running these performances? Apolitical Dionysian Artists. A holy guild founded to ensure that art and performance was given to the gods, that no social or political situation could prevent the artists from doing their duty. Like the god that comes to all, regardless of their sex or status, the artists were expected to perform for all. There was no room for politics and when exceptions were made it was viewed with suspicion (4).

Overall I would be cautious of applying any human system to Dionysos. He is a god of many things and he grants his blessing to all regardless of how they think or what they believe, a god of true equality, this equality can be seen granted to even his enemies. I can see a Dionysian in an anarchist, and I can see a Dionysian in a fascist, I can see him in Old regime before the French revolution and in the Jacobins during the Reign of Terror. He offers himself to everyone.

1. See: The introduction of Dionysos: Archetypal Image of Indestructible Life by Carl Kerenyi.
2. It can be regarded that Pentheus undergoes an initiation experience and is introduced into the cult and retinue of Dionysos.
3. Anesthesia, eventually this role of sacred king became an honouree position, its origins most likely begun with the formal king (Archon).
4. See: On the False Embassy.